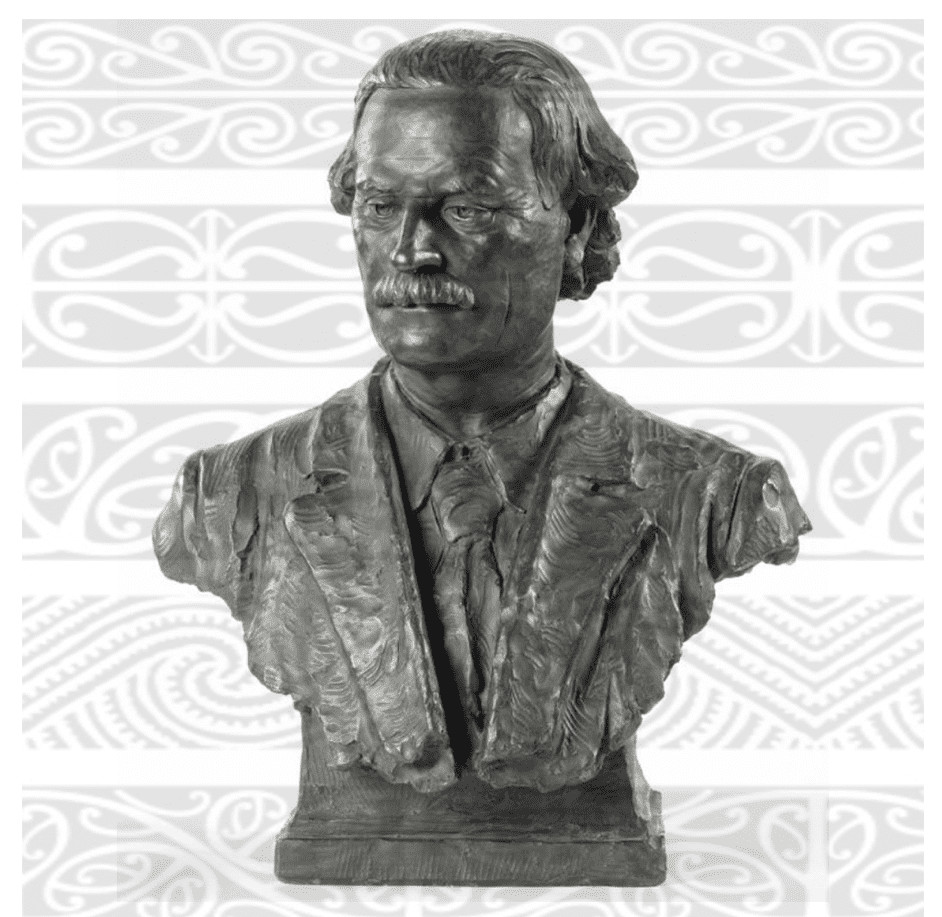 that is always open 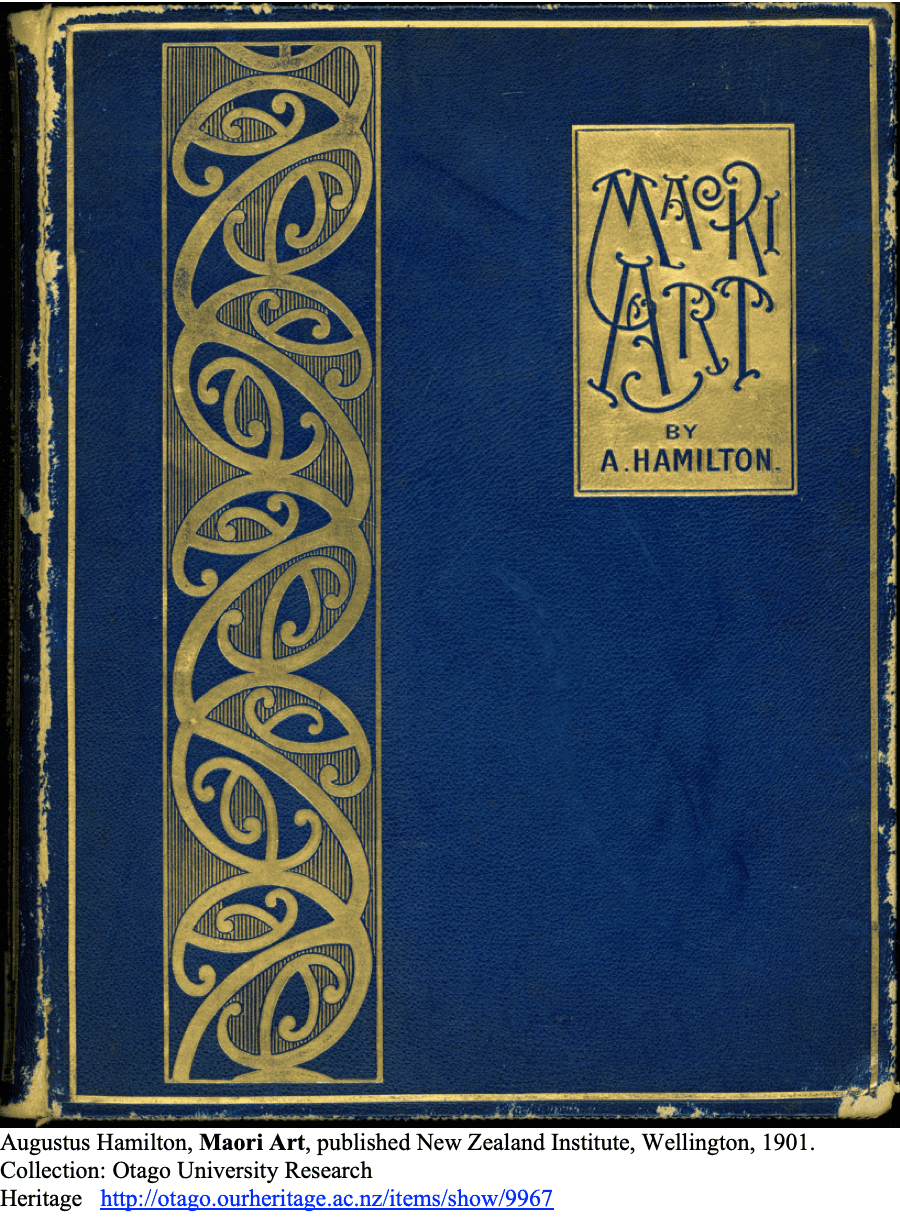 The following entry is an updated version of an article written for a LinkedIn audience in 2013 after documenting the Christ Church yard, Russell with Mark Adams. We were returning to Tāmaki, 22 September 2013, after photographing the Kaitaia Gateway (photo: Mark Adams, Pihirau collection),   in Te Ahu Heritage Museum, Kaitaia for MAORI ART . I realised I needed this essay as a point of reference in the ‘Future Flowerings’ essay, MAORI ART Curator II so I have decided to publish it ahead of schedule. This essay helps explain the longer legacy of trying to write a history of Māori art and it has within it a range of lessons for current generations of writers wanting to write Māori art. It could be considered an extension of ideas covered in ‘Future Flowerings’ and Bulls and Territory This post on the pioneering Dominion Museum ethnologist helps better prepare the ground for a discussion regarding intellectual/curatorial territory and the ongoing delineation of space in the Polynesian Art/museum world – the focus of the next post: MaC V Headlands: unpublished responses 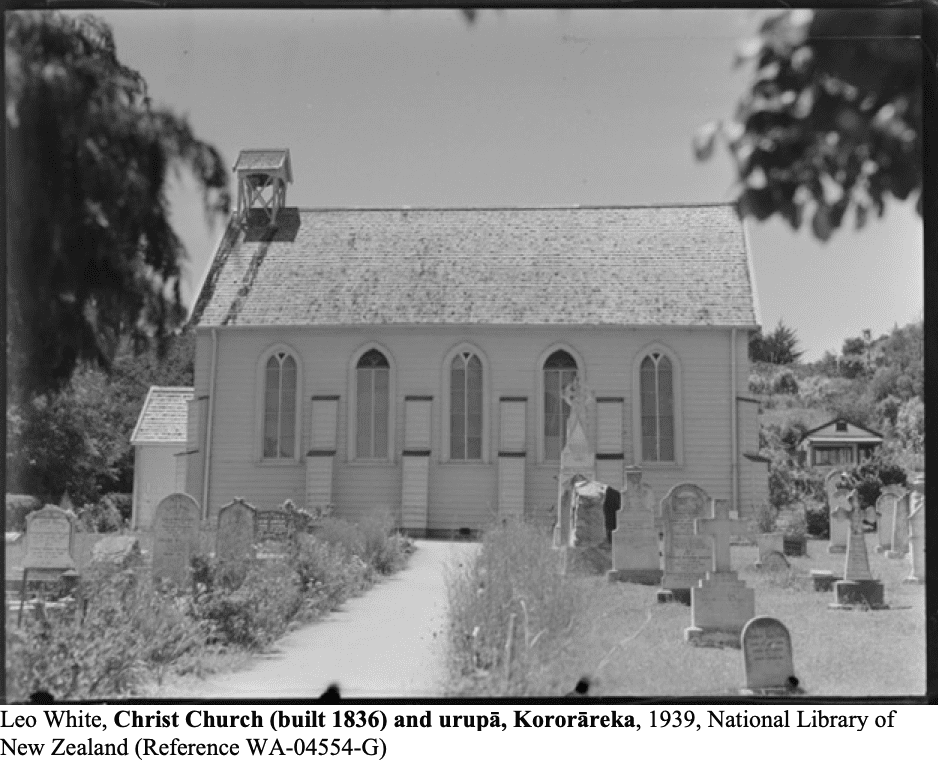 Down the end of a central access path to one of New Zealand’s oldest surviving ecclesiastical buildings – Christ Church, Kororāreka – resides a plump, largely unadorned, funerary stone. Its two simple bronze plaques facing the path remember Augustus Hamilton, (1853-1913). He died a century ago in the summer months researching church records in the North. The kohatu sits as if on outdoor museum display duty. Its own pedestal reminds the viewer a tribute worthy of study lies above. 5 carefully machined marble blocks hold the massive weight. A plaque in English reads indifferently to another in te reo below – the predicament of translation. The Māori text sits horizontally on the face of a plinth block facing out towards the path. The English plaque describes the deceased ‘Director of the Dominion Museum, Wellington, [as] ‘An Eminent Student of Māori Lore, A lover of Nature, an Earnest Seeker after Truth.’

Michael Illingworth, portrait of Augustus Hamilton, bronze statue five years before the ethnologists death in 1908. Behind Hamilton are kōwhaiwhai images reproduced in his voluminous Art Workmanship of the Māori Race

Hamilton’s grave is central foreground. Far left is a memorial to loyalist Hokianga rangatira Tamati Waaka Nene. Although Hamilton died at the early age of 50 (while researching in Northland) this particular, now relatively remote, graveyard seems an entirely appropriate resting place for the scientist with a passion for Māori art. Local Māori gifting the land in the early nineteenth century required the church cemetery allow for the burial of both Māori and Pākehā alongside one another. One can pick out the resting place in White’s image. Follow its perspectival entry point leading along the path to the west face of the church. In the left background of the image sits the slightly rough, pocked top edge of Hamilton’s grave. It is positioned against another pou whakamaharatanga ‘memorial.’ A lofty Celtic medieval cross emblazoned with the nomina sacra IHS – the Greco Roman abbreviation for Jesus – stands out. It is dedicated to prominent nineteenth century Hokianga rangatira Tamati Waka Nene.

The Mark Adams photograph below details the accidental connection between the two. Is it perhaps more the interest of the eye behind the lens that sets up a dialogue. His view is at right angles to that of White and deliberately explores the different visual dynamic aesthetic in the two memorials from very different eras. In contrast to the vertical of Nene’s cenotaph Hamilton’s colleagues selected a more rustic block low to the ground. There is no religious iconography only the bronze text that celebrates a great man. The graves seem odd visual neighbours.

If Nene’s gravestone is the tallest in the yard Hamilton’s feels the most voluminous and textural. It also stands out because it features an odd rustic appreciation of natural materials in a colonial churchyard that celebrates very conservatively crafted marble. It is different from the other older conventionally designed shapes planted in thin, weather-worn slabs of marble. By contrast it’s surface is largely unmodified apart from its face, its reverse and its plinthe. The stone still looks as if it has just been hewn from its rockface. Marks showing its original surface have been left on its top and its side faces. These tell-tale signs, commissioned by members from the New Zealand Institute who funded the funerary stone, seem part of the intended impression. Hamilton was a great man. Hamilton was a New Zealander. Hamilton was someone whose monumental achievements are foundational. Like the rock, his legacy will stand the test of time.

Not coincidentally the grave is located in Kororāreka near Ōkiato ‘Old Russell’, the earliest capital of New Zealand (1840-1841). This is a fiercely nationalistic site. Although the intentions of those who gifted its land are clear the site seems to speak another narrative. It bears the wounds of Māori and Pākehā differences within its white picketed fence boundary. There are signs…

…both outside and inside the church, within speaking distance of Nene’s grave, that colonial rule was extremely fragile, and at times violently contested, as in Ngā Pakanga Whenua o Mua and the Northern Wars 1845/1846. A number of Māori and Pākehā died defending Kororāreka from ancestral cousins Kawiti and Heke and their sacking of the small town in 1845. The church was one of three protected by attackers. Ironically the church commemorates in a plaque within sailors who died defending the site. Visitors can, and still do, quizzically poke fingers into the musket ball holes (above image) that pock the weatherboard walls of the protected heritage church. As with other sites like ominous Ruapekapeka, involving powerful Northern leaders like Kawiti, it doesn’t take much to imagine the resistance. Despite the symbolic presence of Nene guarding Christ Church today this was not an early, uncontested seat of colonial power. 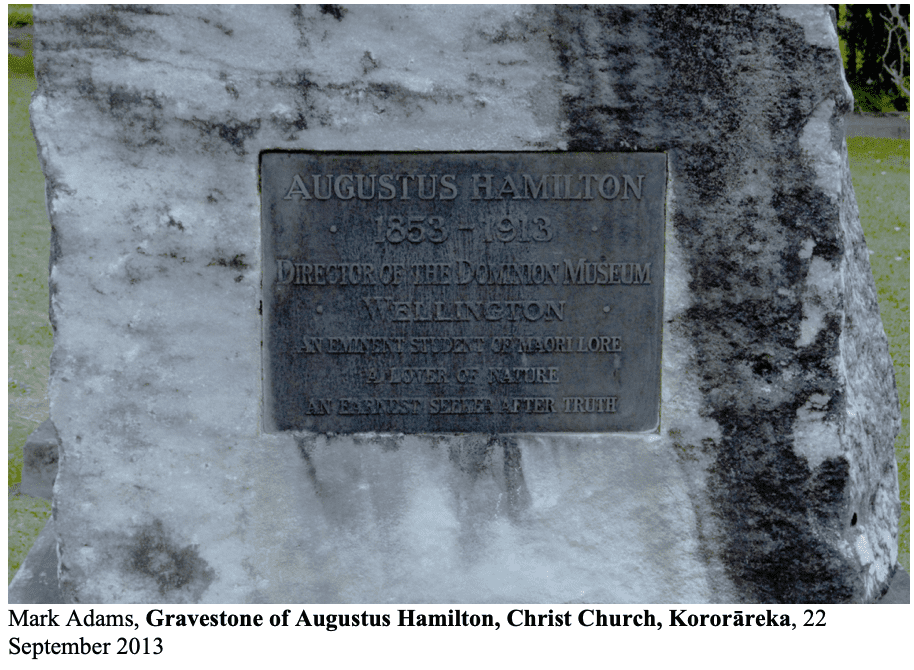 There is as much point trying to ignore Hamilton’s funerary rock at Christ Church as there is his publication Art Workmanship of the Māori Race. Many books on Māori art have not performed as well as that by Hamilton. I have watched a number suffer the indignity of the bargain bin. However, it would appear that Art Workmanship of the Māori Race continues to be a collectable classic even after more than a century since its original publication. I have a copy myself, one of a number of reprints by Holland Press in London. It was a koha ‘gift’ from colleagues at NYU where I was running a couple of workshops in conjunction with the Departments of Anthropology and Film and Religion. It still carries the label within it, ‘Oceanic Primitive Arts 88 East 10th Street.’ Were he alive Hamilton might well be chuffed. There is an awareness of his work even in the Atlantic facing Big Apple.

It is still the largest book yet produced on Māori art. It continues to dominate its territory as a benchmark. It is some 439 pages long. Its page dimensions are 312 x 243 mm. It has in its original published form red cloth boards with gilt Maori design on spine and front board. It has 65 plates (including 7 in red and black of rafter patterns). It is not unusual to see original books carrying inscriptions indicating gift presentation. 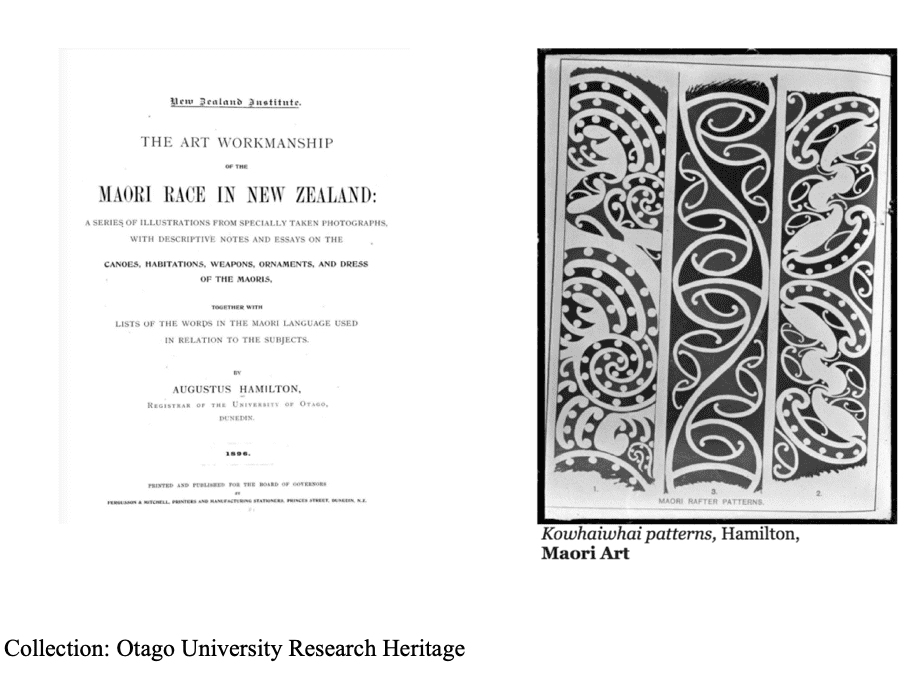 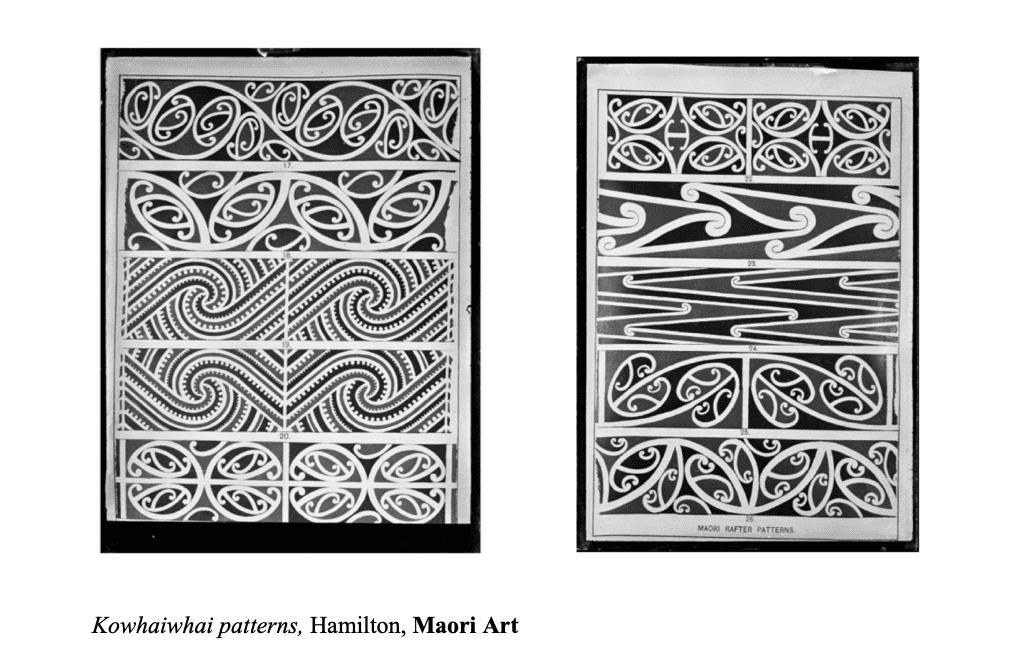 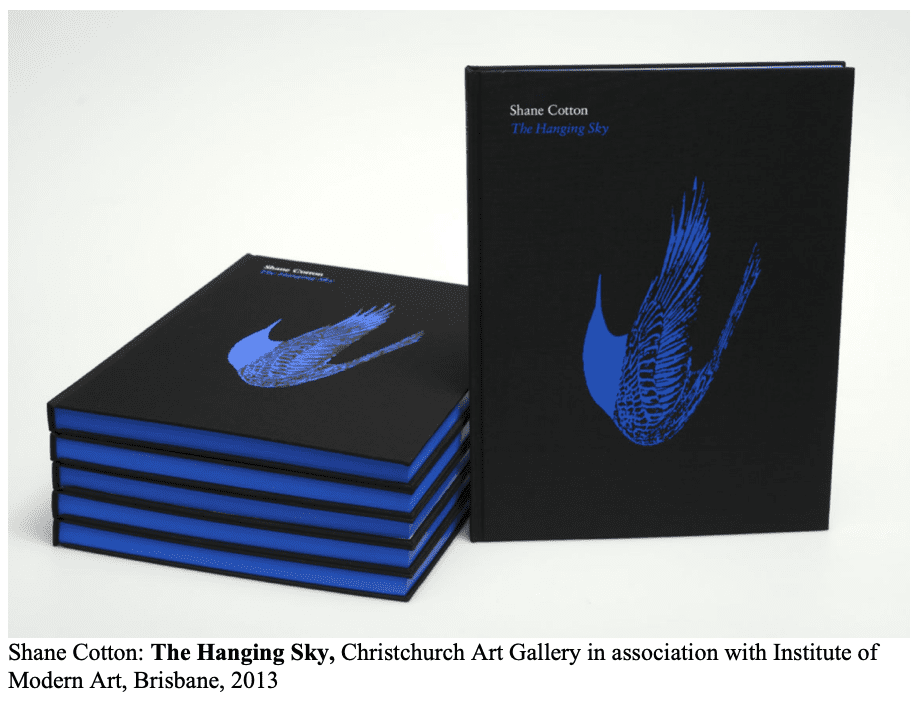 Books on Māori art and Māori artists though, from the turn of the twenty first century, also appear to be getting bigger and more lavish. Mark Amery makes some interesting points regarding the effort by the Christchurch Gallery to market The Hanging Sky: Shane Cotton. Interestingly the writer who questions the mural sized images by the Māori artist in the show praises the scale of the book as a better way of seeing or experiencing the artists work. It’s specifications are proudly outlined – ‘192 pp., hardback, foil-stamped cloth cover, blue edge page edges, 72 full colour plates, 390 x 294 mm; weight 4.10 kg.’ I can vouch for the last measurement when I tried to lift the publication from its perch on an Auckland Gallery bookshop shelf a few years back. To put the Cotton book in perspective, although its page dimensions are larger, it is more than half the size of Hamilton’s work.

New Zealand institutions and a number of overseas museums have now curated large complex and important landmark exhibitions of Māori art. Te Māori was one such pioneering exhibit in both its prestigious American and New Zealand museum venues. I mentioned, in the last essay, Taikaka Anake Kohia ‘contemporary’ Māori art exhibition in the early 1990s referencing size (i.e. the largest), as a marketable point of difference. Eventually some institution is going to create a bigger, larger publication on the artform. However, the important issue (in case there is concern with this focus on scale) is not so much the size of the thing as the foundational nature of Hamilton’s original work. His publication remains a starting point.

In 1913 the ethnologist HD Skinner in his obituary to Hamilton in the ‘Transactions and Proceedings of the Royal Society of New Zealand’ made an important claim. It may very well help explain a legacy of aesthetics and formalism that has hitherto not been fully understood in its New Zealand context. Skinner describes this formalist bias as deliberate, admirable and even scientific. 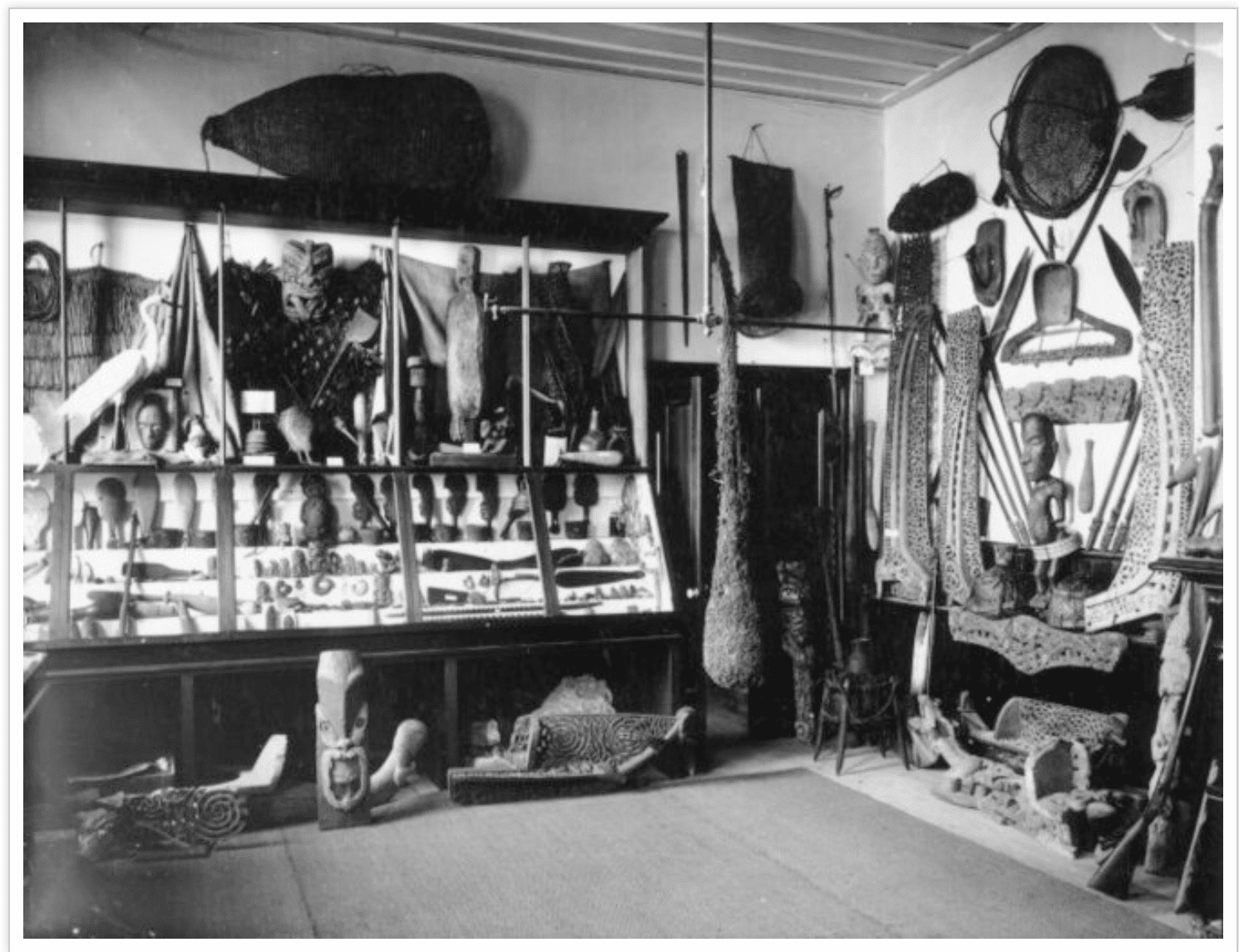 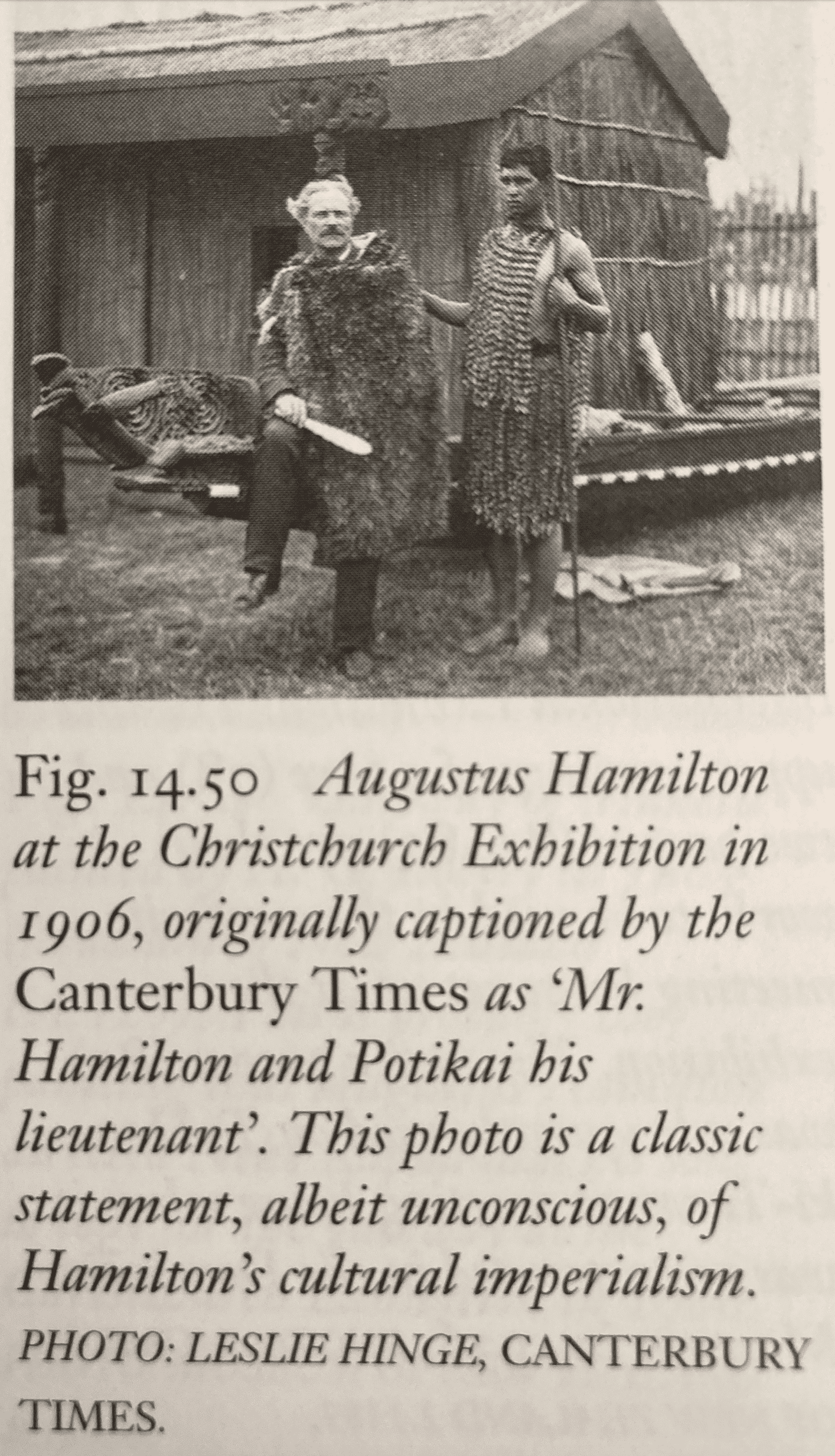 Neich had a lot to say about Hamilton beginning with his Masters thesis on Ngāti Tarawhai carving. Often one finds the author in his theses and subsequent writing  remarking on Hamilton’s patronage of Māori Art. Hamilton, Neich believed, viewed himself as an expert and as the authority on Maori Art. I discuss aspects of this directed legacy (i.e. cultural paternalism) in MAORI ART: History, Architecture, Landscape and Theory.

I share with Skinner an acknowledgement of the foundational nature of what Hamilton created in his work on Māori art. I have difficulties with the substance of Hamilton’s thesis but I accept that it was pioneering work and that it has been influential. Importantly one can only admire the scale of Hamilton’s vision. He was ambitious for Māori art at a time when few others had the drive to seek such an understanding or made any kindred attempt to accumulate, centralise and control a growing national collection of Māori material. This energy and commitment gave the former Director of the Dominion Museum the right to try to establish a foundational narrative.

Pope Pius XI (1922-1939) once said of his Espozione Missionaria exhibition of indigenous objects (including sacred taonga from the Pacific in the Vatican collection) that it:

Hamilton’s book, and the vigorous curatorship that drove it, continues to remain open, available and collectable.

Next Post: Looks at the debate that generated around New Zealands export to MCA, Sydney – the  Headlands exhibition and its 1992 accompanying catalogue

As promised this is a memoir looking at two key figures read as central in Māori academic and Pacific curatorial history in this country as MaC V: Headlands unpblished responses as Māori Art Curator continues.